The music video for the title track was released on June 11, 2019, along with "Happy Happy". The song was also released as a digital download on the same day.

DVD (Type A only)

DVD (Type B only)

Two single release events with the TWICE members (except Mina[1]) were organized:

Both events offered the possibility to buy some exclusive "Breakthrough" goods. 21 exclusive objects were available, along with the group's light stick.[2]

The goods were also available for sale online at the Once Japan official shop, from August 28 to September 8. An additional item was added for the occasion.[3]

To celebrate the release of &TWICE -Repackage-, the remaining "Breakthrough" items were later sold at a selection of Tower Records store in Japan, from December 27, 2019 to January 13, 2020.[4] 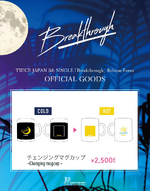 Retrieved from "https://kpop.fandom.com/wiki/Breakthrough?oldid=253283"
Community content is available under CC-BY-SA unless otherwise noted.