Genie Music
Stone Music Entertainment
BLOOM*IZ is the first full-length album by IZ*ONE. It was released on February 17, 2020 with "Fiesta" serving as the album's title track. 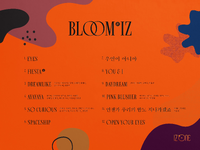