WE.B
Black Level (블랙 레벨) is a six-member boy group under VT Entertainment. They made their debut on February 26, 2022 with the mini album New-Start.

On September 2, 2021, their group logo, under the name "Black Lavel" was revealed, which was later updated to "Black Level".[1] It was also revealed that the group will include former Seven O'clock members Taeyoung and Younghoon.[2] On September 18, a group profile photo was released while the individual profile photos, along with their names, were released the next day on the 19th.

On November 20, they officially opened up their YouTube channel with a short dance cover of "Domino" by Stray Kids.[3]

On December 23, Chanha announced that he would leave the group due to health reasons via Instagram story.

On January 13, 2022, they opened a Rising-star funding campaign to support them for their planned debut in February.[4] On February 15, it was announced that Black Level would be releasing their debut mini album New-Start on February 26.[5] 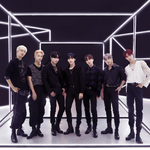