Black Eyed Pilseung (블랙아이드필승) is a South Korean producer duo made up of producers Rado and Choi Kyu Sung. In 2017, they established their own record label, High Up Entertainment, in partnership with CJ E&M.[1]

Rado and Choi started their composing careers in separate around 2009. In 2014, they united under the name "Black Eyed Pilseung".[2] Together they wrote and composed songs for groups such as GOT7, SISTAR,[3] and Apink.[4]

In 2017, they joined Mnet's survival show Idol School as their music producer.[5] That same year, the duo created their own record label, High Up Entertainment, and started holding auditions in 2018.[6] 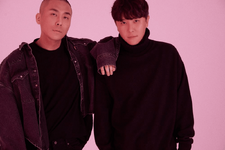