Warner Music Japan
BDZ (ビーディーゼット) is the first Japanese full-length album by TWICE. It was released on September 12, 2018 with "BDZ" serving as the album's title track.

The physical release comes in four versions: a regular CD edition, two limited CD+DVD editions (types A and B) and a limited fanclub CD edition. Each edition comes with one randomly selected trading cards among ten different.

A repackaged version of the album, titled BDZ -Repackage-, was released on December 26, 2018.

An album release event with the TWICE members was organized on October 20, 2018 at Makuhari Messe in Chiba. The event offered the possibility to buy some exclusive BDZ goods. 19 exclusive objects were available along with the group's light stick and light ring.

The goods were also available for sale online on Warner Music Direct website, from October 21 to November 4. An additional item was added for the occasion.

To celebrate the release of BDZ -Repackage, the remaining BDZ items were later sold at a selection of Tower Records store in Japan, from December 21, 2018 to January 7, 2019. 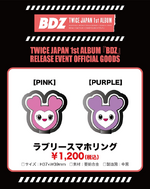 Retrieved from "https://kpop.fandom.com/wiki/BDZ?oldid=194859"
Community content is available under CC-BY-SA unless otherwise noted.