Warner Music Japan
&TWICE is the second Japanese full-length album by TWICE. It was released on November 20, 2019 with "Fake & True" serving as the album's title track.[1]

The physical release comes in four versions: a regular CD edition, two limited CD+DVD editions (Types A and B) and a limited fanclub CD edition (available for ONCE Japan members only).

A repackaged version of the album, titled &TWICE -Repackage-, was released on February 5, 2020.

An album release event with the TWICE members (except Mina[2]) was organized on December 7, 2019 at Tokyo Big Sight exhibition center. The event offered the possibility to buy some exclusive &TWICE goods. 15 exclusive objects were available along with the group's light stick and its case.[3]

The goods were also available for sale online at the Once Japan official shop, from December 8 to 22. An additional item was added for the occasion.[4]

The remaining &TWICE items were later sold at a selection of Tower Records store in Japan, from January 31 to February 16, 2020.[5]

Two other release events, called "handover parties", open upon lottery to owners of a group photocard, were initially planned at Tokyo Dome on February 1 and 2, with the participation of Mina.[6] Both events got cancelled due to the continuing spread of the COVID-19 outbreak,[7] and postponed to a still unknown date.[8] On April 28, 2022, it was announced that the handover event will be changed to online. 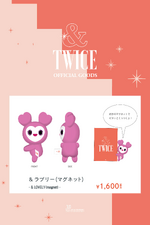 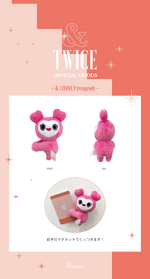 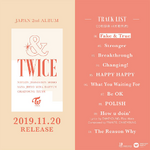